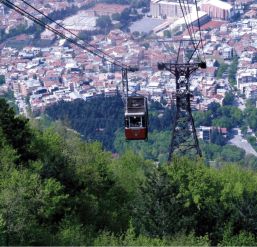 My first ever introduction to Bursa came when we were installing a travelling exhibition in the local science centre and my colleagues mentioned how cold it was there. It was then we realised that Turkey had it’s very own winter wonderland and months later I set out to experience the snow myself with Turkish Airlines.

Together with a group of tour operators from the UAE, we ventured to Mount Uludağ, Turkish for ‘Great Mountain’ which revealed a breath-taking panoramic vista, challenging ski slopes and magnificent views from the top – we even had some fun snowball fights up in the mountains after a scenic cable car ride.

One of the stops we made revealed chic alpine chalets, restaurants, hotels as well as traditional thermal hamams and modern spa facilities. Uludağ is also home to a few national parks and beautiful gardens, which makes it an ideal tourist destination.

Bursa is immersed with history and is awarded the UNESCO World Heritage status for being the birthplace of the Ottoman Empire. The modern buildings are hence built around the mosques, mausoleums and heritage areas.

Situated on the Silk Road, which was the main trade destination that linked the East to the West, the city is also at the core of the silk industry. We also were lucky to visit the Grand Mosque, Yesil Mosque, Emir Sultan Mosque, Yildirim Bazaar, Bursa castle, archaeology museum, the Islamic works museum and the new science centre.

Bursa is known for its food and the Bursa İskender, which is a platter lined with diced Turkish bread and topped with finely sliced doner kebab prepared from lamb meat layered on top with butter and tomatoes did not disappoint. We asked for some garlic sauce that made the dish even more delicious.

We also passed by the seaside town of Mudanya with well-preserved historical houses, a Medikion Monastary and the town’s old train station and ferryboat that now serve as charming hotels.

Highlight of our short trip was visiting the Cumalıkızık village, which was founded 700 years ago and is one of the best examples of Ottoman architecture.The houses are made out of adobe, rubble stones and wood.

Our group had a lovely afternoon at Saitabat, a three-feet waterfall with water sports. When in Turkey, freshly prepared seafood is a delicacy not to be missed. I even had the opportunity to meet some locals here who were passionate about food as they described their local cuisine and helped us sample some of the best delicacies from the region.

To get to Bursa, we flew Turkish Airlines to Istanbul and travelled to Bursa by bus with a ferry ride thrown in for some additional adventure. Bursa is a destination that has a lot to offer so doing some research ahead and planning daily activities ahead of the trip is advisable.